We were to the moon – pun intended – when this private commission came to us. This desk will be used by some young children as a place to do crafts, work on homework, or perhaps plan a trip to Mars! They are made out of plywood and feature LED lights at the top! The planet landscape was custom made and acts as a functional magnet board. This project took about 4 weeks of hard work and attention to detail! 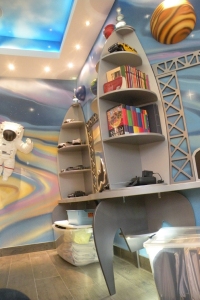 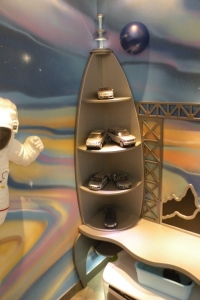 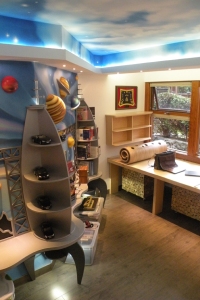 It’s a lot of fun to work with restaurant chains, especially when they are going under a total facelift to their image. This client chain of restaurants in North America is going for the gold in Davey Jones’s locker and put us to work on a custom exterior installation piece.

This 5’ x 5’ piece was hand carved & fiber glassed by the team at Straight Line and has found its new home on the exterior wall of the Browns Social House restaurant franchise in Saskatoon, Saskachewan. The grey color matches the exterior wall color to achieve the appearance that the skull is emerging from the depths!

Enter through a magical armoire into a room designed with imagination & fun for a child. This project was over a year in the making for Judson Beaumont and his crew. A multi – component project featuring seating, a miniature of our beloved Sullivan (meet the Mini-Sullivan!),  room dividers, a television cabinet, and craft desk,  all centered around a castle theme – every childs dream! 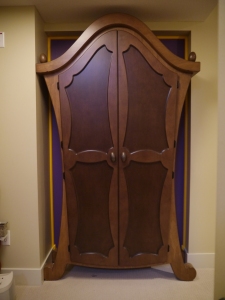 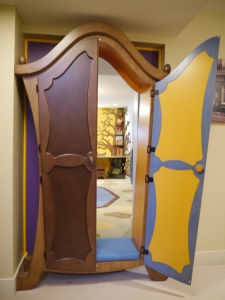 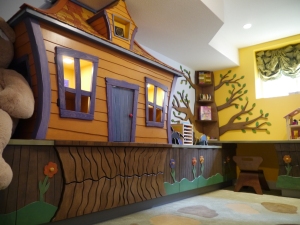 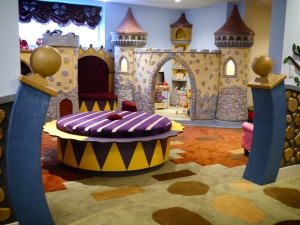 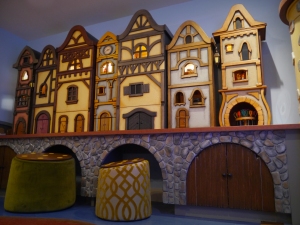 We’ll be calling these pieces “Tree Rings” when we debut them in the Summer Lights show at duthie gallery on July 1st.

The Tree Rings came about after we were invited once again to take part in the Summer Lights show on Salt Spring Island. Since we have been working with large amounts of split Pine Beetle wood recently, we saw it fit to take our idea for the colour-tinted resin tops to the outdoors with these illuminated pieces.

During the day they are a nice perch for your feet or your drink or your . Simple and playful. 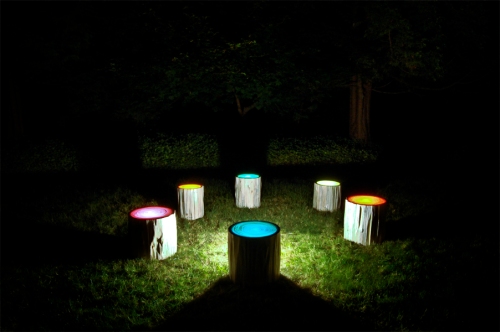 At night however, they transform into something else entirely. Illuminated from within, the different coloured tints in the acrylic resins flood the surrounding area with a bright and lively luminescence . 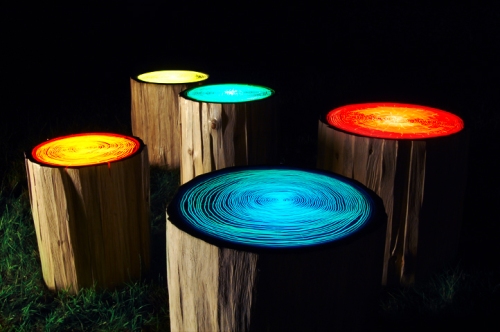 Summer Lights features illuminated works of  art in the environment, artifice in nature, pieces of public art made to be visible in the dark. Viewable from distances and infinite perspectives, they  illuminate the trails and the towering trees of the Woodworks landscape and transform it into a new place, startling, playful and beautiful.  Each piece changes and evolves through the day in different lights and times and weathers.

duthie gallery is open daily from 10 am to 5 pm and  FRIDAY AND SATURDAY NIGHT  from  NINE TO MIDNIGHT through July and August. 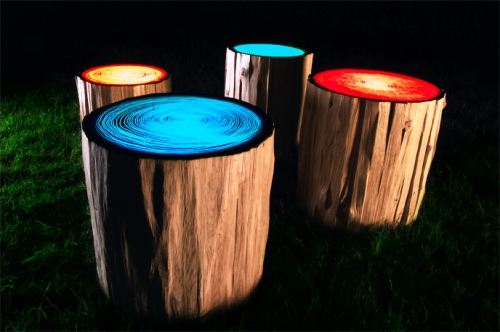 Under the Sea – Children’s Waiting Room

Our latest design and installation was for the Vancouver Coastal Health clinic at the Alan Cashmore Center.

The idea for this play/waiting area was to use very fun and playful imagery in a simplistic design  that would make the area enticing for children in the waiting room, but not so much that they are too distracted when it comes time to leave. 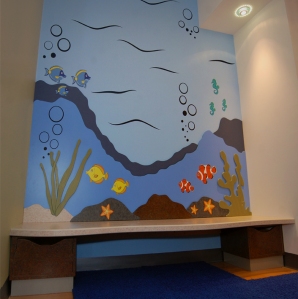 The majority of the work was created using a CNC router to mill out the major shapes and design elements. The fish were printed in vinyl sticker, as well as the bubbles and waves. Almost all of the other elements were pressed with laminate to ensure a long lasting life of vigorous play.

The clinic provides treatment and support for children between 1 & 5 years old, as well as their families. It is a welcome addition to the already fantastic  environment of the clinic.

We’ve just gotten back from installing our huge, 8-foot-tall Squiddy Guards at Salt Spring Wood Works Gallery’s beautiful location on Salt Spring Island. We even managed to find a tree for the Squiddy Guard Bench to encircle!

The Wood Works Gallery can be found at 125 Churchill Road on Salt Spring Island. 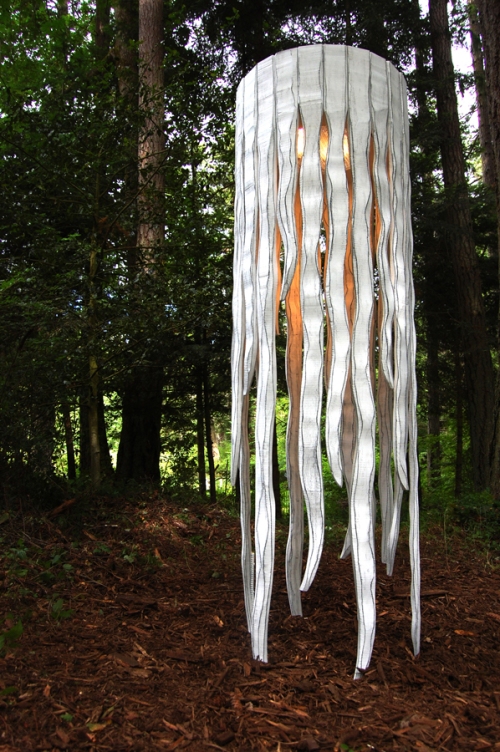 A tall white Squiddy Guard stands at the entrance to the show, ready to light the way come nightfall. 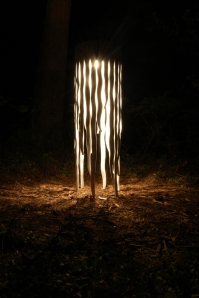 It's amazing how much more light the white Squiddy casts than the black one! 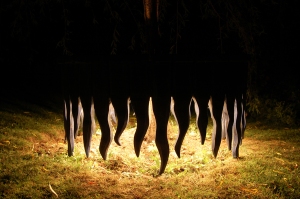 These tall squiddies were made using 2×4’s of pine run through a bandsaw. We highlighted the texture using thick black pencil crayon, or blue or white for the Bench Guard and Black Guard, respectively.

We bolted them together before sawing them down - best to make sure they'll stand up first!

Photo by Dusty Ranier of Createhive

The wall is made from split, sanded and stained pine beetle planks, the distinctive blue stain complementing the stone-like texture of the split wood.

These walls have been a huge hit! We love them because they really show off this really undervalued material that is unique to the Northwest, and our clients love the texture and beauty of the wood, and the versatility of its use as cladding. We’re currently working on a similar wall that will be heading to Regina, this time with the wood pieces running horizontally, where it will form part of  the waiting area in a Dentist’s office.

The Heart Wall in Tokyo 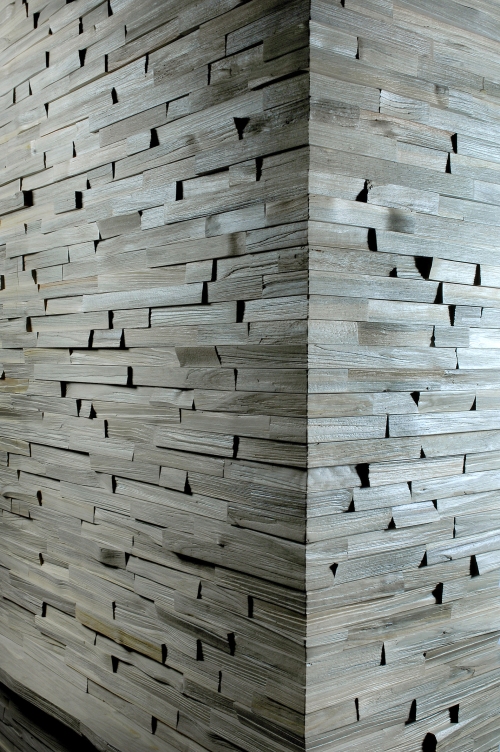 The corner of one of our flat walls.

We’re always looking for new things to do with this cool wood, so check back often to see what we’ve come up with!

Accomplished though they may be in looking creepy in daylight, these curious little tables really outdo themselves at night. Armed with LED pods, they transform into a starburst of leggy shadows. 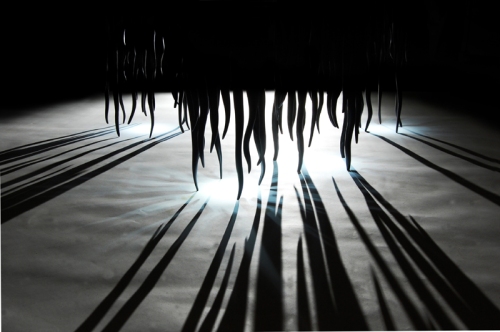 These guys can be seen at booth 222o with BC Wood in their daylight form at this year’s ICFF in New York! Go check them out if you can!

Some of the major projects we’ve been working on over the course of the past few years have been the design, construction and installation of children’s play areas for YVR Airport in Vancouver.

I asked Jud about how these projects got started and why…

“I travel a lot and I find, in the airports, there’s nothing for kids. Well, there’s nothing they use their imagination on, you know?
If there’s anything there for them, it’s “standard play equipment”. And even that’s uncommon. YVR contacted me through my work as a furniture designer. They wanted something to do with nature. I wanted to do something inspiring. I like the idea of kids coming in; maybe for the first time, waiting for their flight, and then forty-five minutes later they leave. It’s just a simple thing, you know? But it’s  fun and it’s there for them.” -Judson Beaumont

The first one we put in was the tugboat.

YVR's International Terminal has been home to this durable and friendly tug for over 10 years!

The Domestic Terminal sports three separate places for kids to unwind.
With West Jet, there is a garden maze to run around in and a topiary TV for seated entertainment. 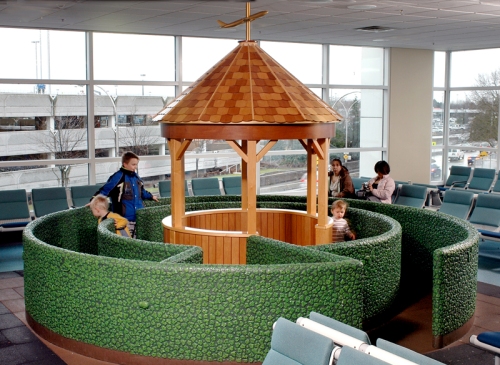 A good run-around in the terminal makes for a much easier flight!

Even TV can be more than just a black box when you introduce a bit of imagination.

Air Canada celebrates one of Vancouver’s primary attractions: winter sports! The Whistler Play Area is one of two that celebrates this theme, the other being a welcoming fireplace that contrasts nicely with the bustle of a busy airport.

The Whistler Village area provides a quiet place for kids to read or play. 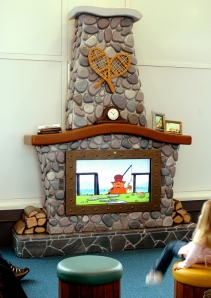 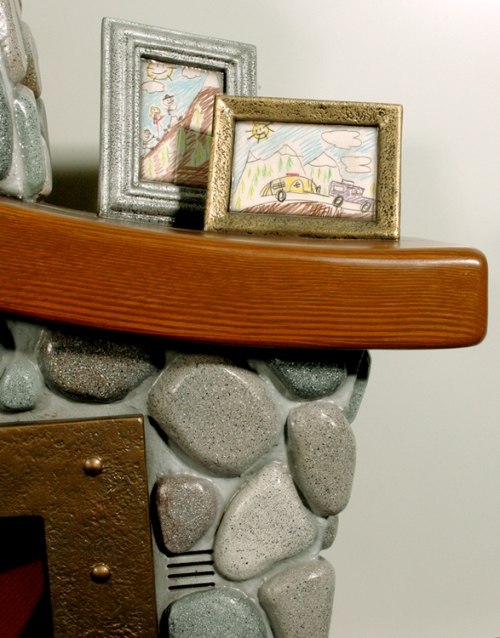 Even the public food court in the Domestic Terminal has an area for kids to play and just be kids.

Kids need kid spaces.  Fortunately for us, they’re pretty fun to make, too!

An installation we recently completed for our Client ING Direct that was nominated for Wood WORKS’ “Wood Innovation Award”.

“A new category this year, the Innovation Award will recognize creative and innovative approaches in the use of wood in building design, product design and/or processes. The award will be presented to an individual or firm which demonstrates “thinking outside the box” using wood.”

More information can be found on Wood WORKS’ website: http://www.wood-works.org

Jud used the Mountain Pine Beetle wood for the river rocks in the desk, the desk base and the living wall cover. Let us know what you think!

With its organic shape and flowing texture, this desk is both unique and beautiful.

Under the glass, the polished wooden river rocks are even more evocative of the real stones that inspired them.

Constructed from split Pine Beetle Wood, this living wall makes a lively and positive contribution to the office space.

If you  would be interested in having us design an interior space for you or your company, we’re always interested in taking on new projects so give us a shout!